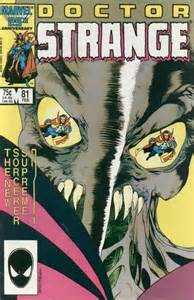 What a difference an issue makes, eh? Gillis does a fine job of filing us in as the story progresses, so it doesn’t feel like we’ve missed much overall.

Doctor Strange is in stasis, hurtling across the cosmos in the back of some spaceship. The minotaurian pilot is a disciple of the weaver guy seen in issue #78. Luckily for the Doctor, this Muppety-looking character has himself some mystic background and serves as a suitable vessel for Doc’s recovering body.

Things I wish I’d have seen:

This magical bad guy is waiting for Strange and ready to kick butt having taken all of the magic from Doc’s place and using it for himself. Wong and Topaz are still being held captive, perhaps to rattle their savior. This bad guy Urthona is very happy with himself and the baubles he’s recently acquired.

Urthona takes all the typical avenues of evil-hood: attacking from afar, then sending his minions to do his dirty work. Of course, once confronted by Strange himself (in his minotaur body double) the bad guy does what any bad guy does best: the beats the crap out of his hostage.

The minotaur leaves his own body for Doctor Strange’s body to help out. He rescues Topaz and what’s left of Wong. Somehow (last issue reveal?) this bad guy has the other half to Topaz’s soul.

Doctor Strange takes some pretty drastic measures here, much to Urthona’s chagrin. Great foil here, indeed. As conscious Doctor Strange has been lately with not thinking before using his powers, I’d like to see where this goes. He really did a number on the future of his title.

We’re done with the Strange run, folks. What could be in store for us next?